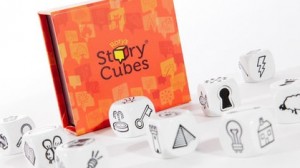 I LOVE Rory’s Story Cubes they have so much potential for the classroom to develop a wealth of literacy skills. There are physical versions of the cubes and also digital versions.

There are 3 sets of cubes Original, Voyages and Actions. There are also some additional mixed sets of cubes you can purchase. Each set contains 9 cubes with a  different pictograph on each side of the dice.

You can use them to orally create stories (group the children into pairs or threes and see which group can come up with the most inventive story using 4 of the dice). This activity would help to consolidate speaking skills (tone, pitch, volume), listening (negotiation, collaboration, instructions), sequencing, vocabulary, imagination, conjunctions etc.

Use the cubes to mime a event and the other students have to guess the actions, story etc.

The cubes could also be used as a story prompt. Roll three of the dice and you could model to the students how to create a story using all three. The action cubes would be good for talking about verbs and extending sentences eg/ if you rolled a wizard and running the sentence could be “The grizzly wizard was desperately running after the troll……. compared to the wizard was running. The prompts could be used to write a imaginative narrative, or create a comic strip using pen and paper, apps, or websites, students could create an animated puppet show using puppet pals or toontastic.

For lots more ideas and a PDF of further ideas click here. 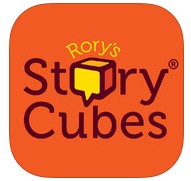 The great thing about these cubes is there is also  a digital version.

It costs $2.49 to download the original and the actions version of the cubes (with additional in app purchases you can buy the other cubes).

To extend this the students could create their own sets of cubes (eg narrative settings cubes – forest, castle, school, house), the cubes could be physically made using the downloadable cube printable.  The students could draw pictogram on the cubes to represent the image.

Read write think has a digital cube generator where you can add the details on the cube and then print it out. 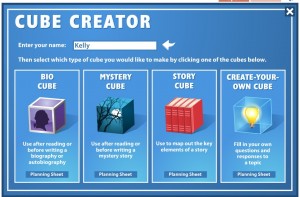 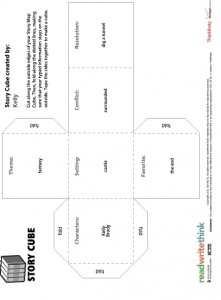 This is one I very quickly prepared :)………

There are so many uses of story cubes that I would highly recommend them for classrooms.