Apps and EduGaming for the winter olympics

Unfortunately there are not may apps for the winter games, and a few off them have too many adds to navigate (I have only looked at the Free ones for the classroom). So below are a few that I found that could be used in the classroom.

There are a few information style apps which will keep the class updated with information about the games.

Sochi 2014 Guide: This FREE app is similar to the website for the games, just presented in an iPad format. When you start the apps it allows you to set the language and the timezone, at the end of this section it wants you to connect to social networking (in the top right hand corner there is a button called skip settings if you press this you can skip the social networking part). The app has the Olympic schedule, news, photos, info about the events and city guides. You could use this app for a variety of classroom teaching and learning. It could be projected onto the whiteboard and the information could be read as a class. You could use it as a great multimedia literacy activity by getting the students to find information by navigating around the app. Eg, where was the Olympic torch on December 6th, January 5th etc. How much are the Olympic tickets? Watch the video titled and …………

For all the USA Fans, Team USA have an official app for all things relating to the USA winter Olympic Team. The app is called 2014 Team USA Road to Sochi

Apps for teaching about the Russian Culture

What about greeting your class each morning with a little Russian. This app SpeakEasy Russian ~ Free Offline Phrasebook and Flashcards with Native Speaker Voice and Phonetics is fantastic. It is incredibly easy to use and has a good repatriate of Russian words.

Moscow – Fodor’s Travel has lots of information about Moscow. You can explore at sights, performing arts, maps etc

There was not a lot in gaming which weren’t add filled, or a little boring. Hence I have only added one app here.

Sochi Winter Games- Guess the Competing Nations Flags: You could play this game as a whole class and use it in two ways. The first way would be the class guessing the name of the flag, the second way  they have to Google the flags and come up with the correct answer, this could be done in a time limit. Another idea could be use the four corners of the room to represent option 1,2,3,4, when the question is posed the kids pick the one they think is correct and stand in the corner correlating with the answer they think is correct. The kids which are correct carry on in the game and the others sit down. The next question is asked and the remaining children choose the corner again this continues until one winner remains. 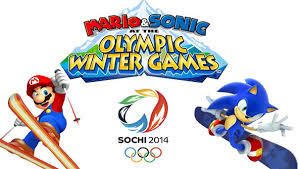 What about using the WiiU putting your class in teams and each day of the Olympics the class teams compete across the 16 Olympic  games in Mario & Sonic at the Sochi 2014 Olympic Winter Games. (if you don’t have a wiiU I am sure one of the students might have one you could borrow, with parental permission of course). The results could then be tallied and graphed. You could compliment this by creating a newspaper of the daily events with photos and quotes from the teams, video the competition and then imovie to create a news report on the class Olympics. Teams could create their own countries and write descriptions of their teams. The video game could provide the starting point for  lots of across curriculum activities. It would also develop skills in cooperation, teamwork, communication etc. The you tube clip below form Nintendo gives an overview of the game http://www.youtube.com/watch?v=tpNjiFt7Xgw.